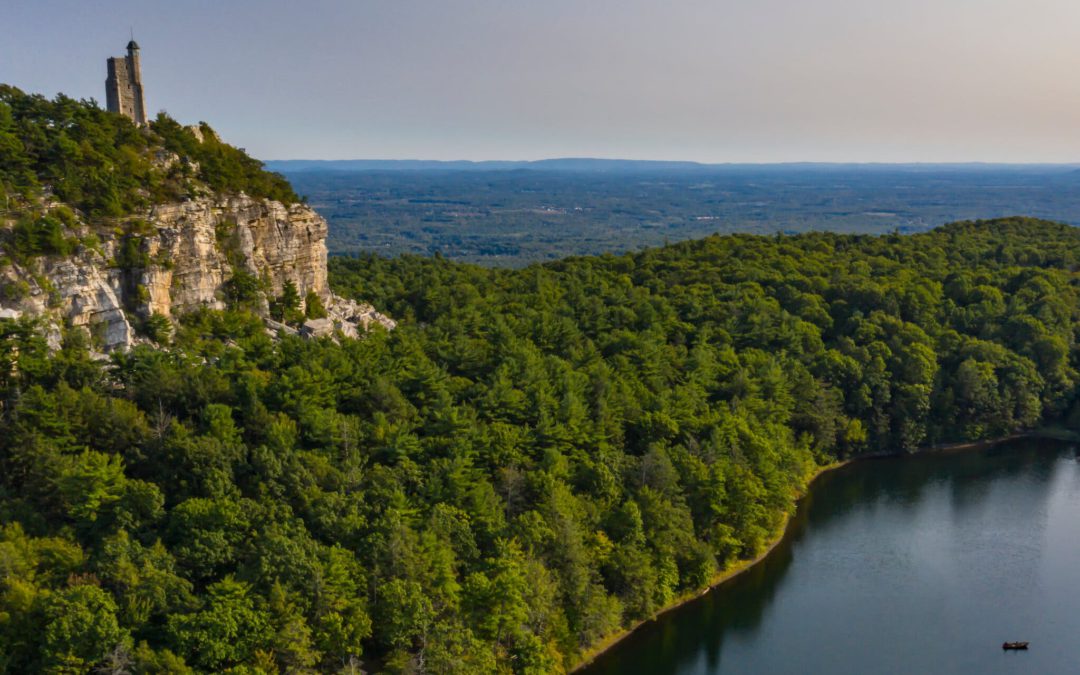 Surrounded by nature preserves and anchored by a state university, New Paltz is undergoing a pandemic-related boom thanks to a wave of people exiting New York City.

The following information was summarized from an article in the NYTimes.com by Julie Lasky.

If New Paltz were a Tinder profile, a lot of people would be swiping right. This town about 80 miles north of New York City, in southern Ulster County, is sporty, brainy, cultured and beautiful. Cradled by a mountain range, surrounded by meadows and forested preserves, cut through by a river, anchored by a state university and speckled with historic houses, shops and galleries, it attracts athletes, day-trippers, art lovers and now Covid-19 refugees.

Even before the pandemic, New Paltz, which is also the name of the village within the town, lured urban dwellers with a package of fresh air, green space and progressive politics. Enlightenment has long been a hallmark. In 2004, the village’s then-mayor, Jason West, a member of the Green Party, performed several same-sex marriages more than a decade before the Supreme Court guaranteed that right.

Today, newcomers are gobbling up housing inventory, pushing up average sale prices by more than 30 percent and making traffic a concern not just to drivers but to the many cyclists who ride the roads.

Richard Souto, a resident with a son in the public schools, said the influx was notable before the pandemic, and the recent population boost has not yet made a profound visual impact. “But I’m certain that when everybody starts being out and about again, and school looks like it used to look, we’re going to start to see a lot of new faces,” he said.

Mr. Souto, 50, grew up in the area. After more than two decades in New York City, he returned five years ago with his wife, Kristen, a New Paltz native, and their son, Andre, now 12.

“We were figuring out how to get out of the city every weekend,” he said. “The pattern lasted long enough where would ask ourselves: What would life be like upstate?”

They were fortunate to find a village house for rent (students at the State University of New York at New Paltz usually snap them up). Two years later, they bought a 75-year-old Cape across the street, for $349,000. Their house is 1,470 square feet, on a fifth of an acre, one block from Main Street and its many conveniences.

Recreation is close, too. “We have a mountain just down the road,” Mr. Souto said, referring to the Shawangunk Ridge, beloved of climbers the world over. “We bike and we hike and we walk and we kayak, all within literally five to 10 minutes of our house.”

Until the pandemic, Mr. Souto would stroll five minutes to the Trailways bus station on Main Street to ride to his job in Manhattan as the executive director of an arts education nonprofit called LEAP. He did not commute every day and took care to avoid peak travel times, when the 100-minute ride could expand to two hours.

“The New York City-New Paltz commuting culture has been a thing, and now it’s a growing thing,” he said.

“We call it the Hudson Valley hustle,” said Matt Eyler, 49, who discovered New Paltz in the 1990s on his motorcycle, riding through the mountains and taking in the loveliness. Mr. Eyler and his wife, Maya, relocated in the early 2000s from Manhattan. He has built a business there dealing mainly in commercial real estate, and he boosts his income by writing marketing copy for real estate companies in New York. “It’s cheap to live here versus the city, but not that cheap,” he said. “You cobble it together.”

Citing the Daily Freeman, a local newspaper, Mr. Eyler said the combination of new residents and second-home owners moving in permanently is projected to increase the population of Ulster County by 25 to 30 percent. While he pointed out the stress this would inflict on a small community, he noted that the influx is bringing business opportunities, too. “Commercial investors recognize the economic boom unfolding here and want to be part of it,” he said.

Among the new developments are Zero Place, a 46-unit, energy-efficient mixed-use project on North Chestnut Street that is almost completed. Last month, New Paltz received its first credit rating, from Moody’s, and raised an $8 million bond to redevelop a wine warehouse at the eastern edge of town into a new police headquarters and courthouse.

Mr. Eyler predicted that the character of New Paltz would change, and not all for the better. “Middle-class people are getting displaced because they’re seeing the opportunity to cash out,” he said. Not only are more cars on the road, but the new drivers don’t follow the local custom of pausing to let other drivers cut in, he said.

The town of New Paltz encompasses about 34 square miles and 14,000 people in the mid-Hudson Valley. At its heart is the 1.8-square-mile village, with a population of 7,100. The two entities maintain distinct governments and have predictably different atmospheres. The village is dense with commerce, its streets and shops normally enlivened by the 8,000 students who attend SUNY. (They are less visible now, with the pandemic, but still around.)

The properties bounce from Victorians to midcentury ranches to townhouse complexes to Colonials dating from the 17th century, when New Paltz was settled by the descendants of French Protestants. On Huguenot Street, seven original stone houses are part of a 10-acre historic district and museum. Some of the houses in this landmarked area are privately owned by history lovers who don’t appear to mind the tourists strolling by.

The village center is chock-full of restaurants with globe-hopping cuisines (Tibetan, Thai, Italian, German, Mexican, Japanese). There are also boutiques, cafes, gastro pubs, a new cheesecake shop and a quirky shopping center near the Wallkill River called Water Street Market. The two-year-old Denizen Theatre at the market’s upper level is slated to reopen on Oct. 8, after a pandemic hiatus, with the world premiere of a play by Neil LaBute (eight socially distanced seats will be available for each performance). Art galleries and craft shops offer supplemental eye candy to the Samuel Dorsky Museum of Art on the SUNY New Paltz campus.

East of the historic village, out toward Interstate 87, is more conventional retail — several shopping centers with chain stores. West of the river, houses and lots grow bigger, and farms, orchards and vineyards unspool. Unison Arts, on Mountain Rest Road, has sculptures arrayed in fields. Coppersea, a 75-acre distillery on Springtown Road, produces spirits from local grain.

Many encounter New Paltz for the first time as the gateway to Mohonk Mountain House, the bucolic 151-year-old resort that is one of the town’s major employers. The 8,000-acre Mohonk Preserve can be explored by the public for a day rate of $15 for hikers and $20 for cyclists, climbers and horseback riders. The new River-to-Ridge Trail in New Paltz links the 22-mile Wallkill Valley Rail Trail with 90 miles of trails atop the Shawangunk Ridge in the Mohonk Preserve and the 22,275-acre Minnewaska State Park Preserve.

Available properties are nonetheless evaporating like raindrops on summer asphalt. “If you see a house on the market for 72 hours, you’re questioning why,” said Lindsay Stevens, who owns a real estate brokerage on Main Street with her husband, Bruce Stevens.

As for the once-strong rental market, apart from student housing, where the pandemic has left vacancies, it is tapped out, Ms. Stevens said. Second homes have been leased to former city dwellers for as much as $30,000 a month. Other rental houses, she said, are filled with local residents who found the temptation of booming prices too hard to resist and sold their own homes. Now they need a place to live.

Melanie Cronin, 47, who runs an art gallery at Water Street Market that sells work by her husband, Ryan Cronin, said she loves New Paltz “because it is visually beautiful and filled with wonderful people, but also because it is a fabulous place to own a business.” The Cronins opened the gallery, called CronArtUSA, five years ago, Ms. Cronin said, “and felt confident in doing so because we knew the community had our backs.” On a recent day, it was filled with paintings inspired by Mr. Cronin’s monthlong residency last year in Senegal.

Not far from the gallery, a pet store recently displayed a sign urging people who had lost their jobs to help themselves to free pet food. Nearby, a cooperative antiques emporium offered giveaway jewelry in front. When a reporter, distracted by a conversation with a fellow bargain hunter, left her phone next to a box of clip-on earrings, her new friend tracked her down deep in the store, many, many vitrines away, and returned it.

Trailways offers direct bus service from Main Street in the village to the Port Authority Bus Terminal five times a day on weekdays and with less frequency on weekends. The one-way fare starts at $23, and travel time is an hour and 40 minutes, barring traffic disruptions.

Some commuters drive 20 minutes east, across the Hudson River, to Poughkeepsie and catch a Metro-North train to Grand Central Terminal. Travel time is between an hour and a half and two hours depending on time of day; the one-way, off-peak fare is $19.25.

New Paltz’s roots lie in the 1677 purchase of 40,000 acres from the Esopus tribe of Lenape Native Americans. The buyers were a dozen men of Huguenot descent whose forebears had left France to take refuge in Die Pfalz, or the Palatinate region of southwestern Germany, from which the town adopted its name. New Paltz was incorporated in 1785.